Most Java developers have probably experienced conflicting versions of a library on the classpath and the resulting runtime issues such as NoSuchMethodError. This usually happens when an application uses two unrelated client libraries, that each transitively depend on different versions of another library.

Apache NiFi has traditionally provided isolated class loading per NiFi Archive (NAR). This means that a given NAR only knows about the libraries included in that NAR, and will not be affected if another NAR has different versions of the same libraries.

Some components (processors, controller services, reporting tasks) may need to load additional libraries provided by the user at runtime. For example, since NiFi can’t bundle all of the possible JDBC drivers, the DBCPConnectionPool allows a user to specify the location of a JAR containing a driver. There could be two DBCPConnectionPools, one pointing at a MySQL driver, and the other pointing at a Postgres driver.

Up until recently, if a component required loading additional libraries as described above, it was the responsibility of the developer to handle the appropriate class loading. The upcoming NiFi 1.1 release will introduce a new “per-instance” class loading capability as part of the NiFi framework, and will simplify these scenarios for the developer.

The remainder of this post will take a look at how NAR class loading has traditionally worked, and then give an overview of the new capabilities introduced in the upcoming NiFi 1.1 release.

As an example, lets imagine we have two NARs, NAR1 and NAR2.

NAR1 bundles a processors JAR containing Processor1, and Processor1 uses Guava version 18, so the guava-18.0.jar is also bundled in NAR1.

NAR2 bundles a processors JAR containing Processor2, and Processor2 uses Guava 17, so the guava-17.0.jar is also bundled in NAR2. 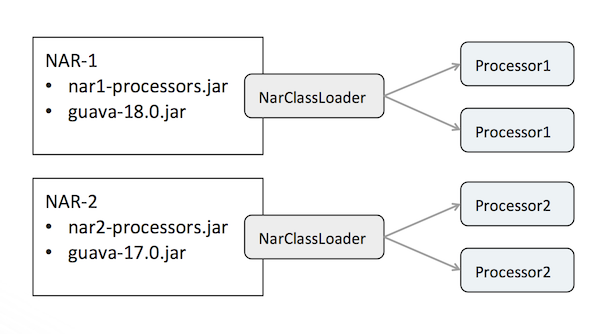 During start up, NiFi creates a NarClassLoader for each NAR in the lib directory. Whenever a component is created, which could be from adding a component through the UI, or when loading an existing flow, the framework looks up which NAR contains the class of the component, and uses that NAR’s class loader to instantiate an instance of the class.

When an instance of Processor2 is created, the NARClassLoader for NAR2 will load the class for Processor2, as well as all dependent classes from the Guava 17 JAR, and will have no idea about the classes loaded by NAR1’s class loader.

This is how class loading has traditionally worked in all previous NiFi releases.

For most components the InstanceClassLoader will act as a simple pass-through to the NARClassLoader. However, a component may declare a PropertyDescriptor representing additional resources to add to the classpath.

In our example above, lets imagine Processor1 declared the following property:

The dynamicallyModifiesClasspath builder method indicates to the framework that this property should be processed as a classpath resource.

In this scenario, the Processor1 class and all the Guava 18 classes would still be loaded only once by the NARClassLoader.

Sometimes it is necessary to completely isolate all the classes for each instance of a component, including the component class and its library classes normally loaded by the NARClassLoader. This can be done by placing the @RequiresInstanceClassLoading annotation on a component. 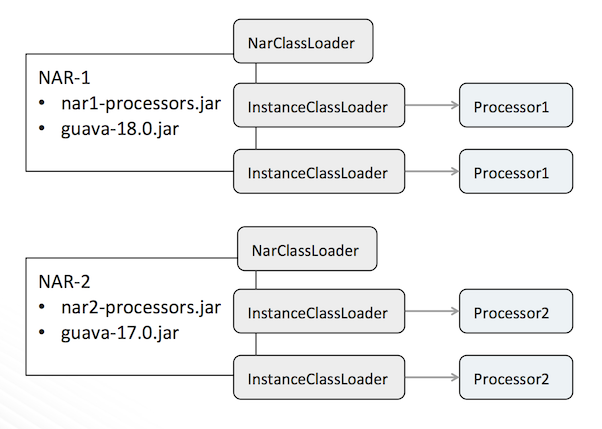 In our example above, if Processor1 and Processor2 had the @RequiresInstanceClassLoading annotation, the processor classes and Guava classes would be loaded multiple times by each InstanceClassLoader, and the NARClassLoader serves only as a source of information to access the resource locations for the given NAR.

A possible reason for doing this would be to guarantee that no state is shared between classes in a client library. For example, if a class in library1.jar has a static variable, we may not want the first instance of Processor1 to see changes to that static variable made by the second instance of Processor1. By having completely separate InstanceClassLoaders, all of the classes in library1.jar will be loaded separately in each InstanceClassLoader, and won’t know anything about each other.

It is important to mention that when using the @RequiresInstanceClassLoading annotation, it could result in a higher memory footprint, meaning if you created 100 instances of Processor1, the classes required by Processor1 would be loaded in memory 100 times, rather than once.

If a component simply needs to add a few JARs to the classpath of a component at runtime, then this can be done by specifying dynamicallyModifiesClasspath(true) on the property.

If the component needs to guarantee complete isolation of classes across instances, then the component can also declare the @RequiresInstanceClassLoading annotation.