One of the new features in Apache NiFi 1.2.0 is the ability to understand versions of components (processor, controller service, reporting task) and run different versions at the same time, with the ability to change between versions.

As a quick refresher, NiFi extensions are generally packaged as NiFi ARchives (NARs). A NAR contains the code for one or more extensions, as well as the dependencies required by those extensions. During start-up NiFi unpacks the NARs and uses Java’s ServiceLoader to identify the available extensions. Each NAR is given its own class loader to isolate dependencies across NARs, and each NAR can have a dependency on one parent NAR.

The standard way to create a NAR is by using the NAR Maven Plugin provided by the NiFi community. As part of creating the NAR, the plugin generates a MANIFEST file that ends up in the META-INF directory of the NAR. Looking at the MANIFEST file of nifi-hadoop-nar from a previous version of NiFi, you would see something like the following:

If you have any NARs that haven’t been rebuilt with the latest NAR Maven plugin, they will still work with NiFi 1.2.0, but will be given a version of “unversioned” and a group of “default”.

NOTE: The term “bundle” will be used to refer to where a component came from. In most cases a bundle is a NAR, but technically components with no dependencies can be deployed to NiFi’s lib directory in a JAR. The “system” bundle is a logical bundle that represents all JARs directly in the lib directory.

One of the places where component versioning is noticeable is adding components. The screens for adding processors, controller services, and reporting tasks now show a “Version” column, as well as a “Source” menu to select the group. 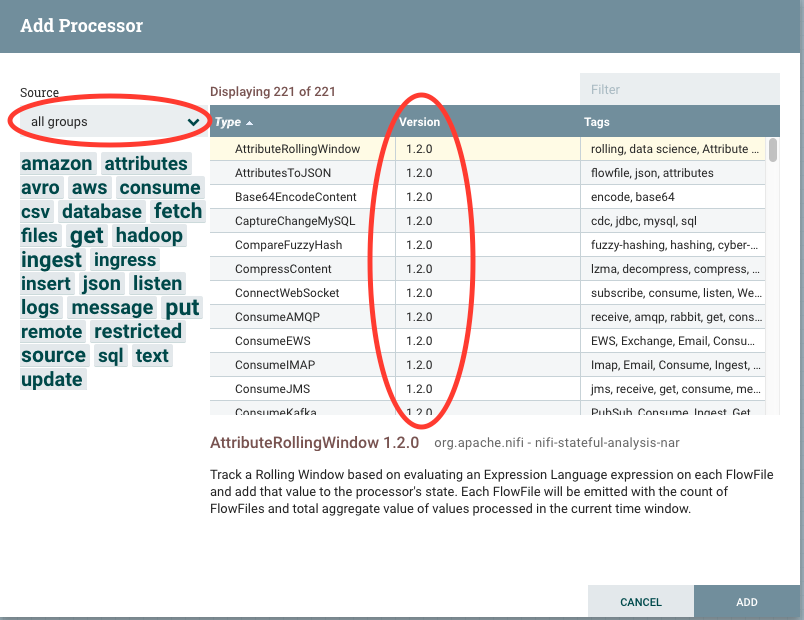 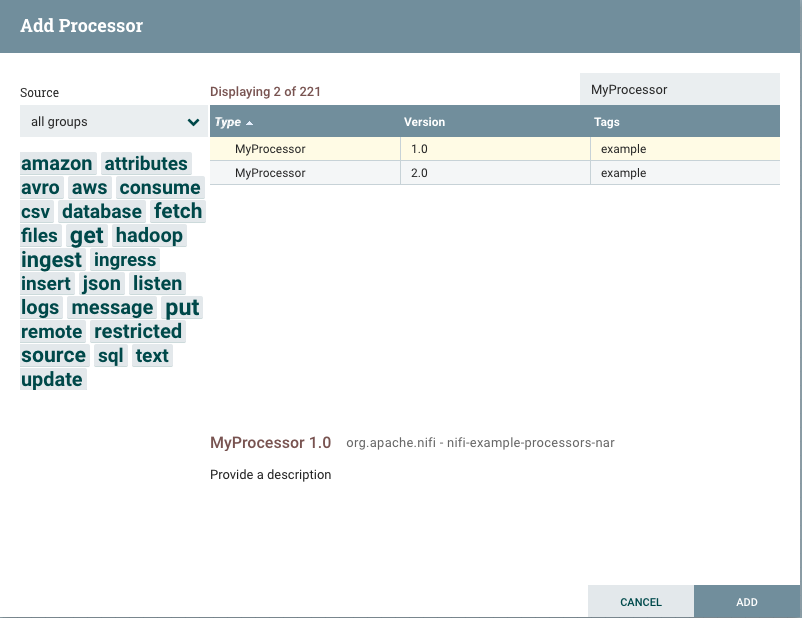 If we add MyProcessor 1.0 and 2.0 to the flow, we can see that the processors now indicate the bundle information.

We can also change the version of a component in-place by right-clicking on the processor and selecting “Change Version”: 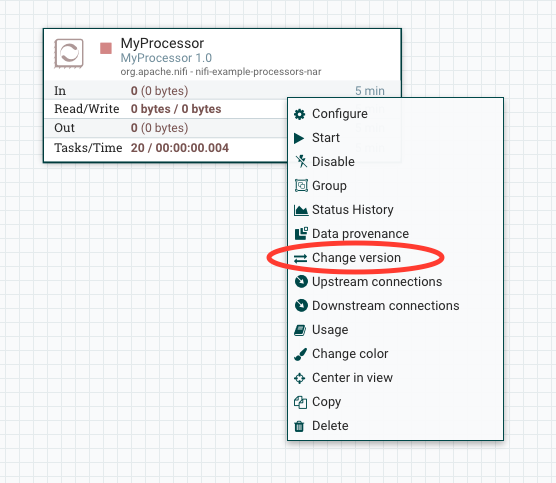 NOTE: You must stop a component before changing versions, and the “Change Version” menu option will only display if there are other versions to change to.

Selecting “Change Version” will display prompt with the other available versions: 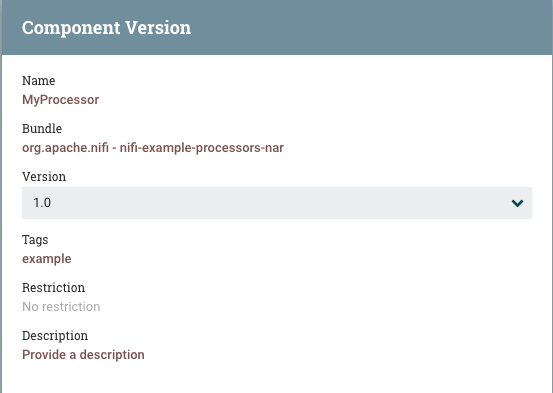 Changing versions is only allowed across bundle’s with the same group and id.

For example, MyProcessor 1.0 and 2.0 both come from bundles with a group of org.apache.nifi and an id of nifi-example-processors, so changing versions between 1.0 and 2.0 is allowed. If there was another bundle that also had MyProcessor, but had a different group or id, then it wouldn’t be available to change to.

Behind the scenes the bundle information for a component is serialized to the flow.xml.gz:

Why is Component Versioning Important?

While running multiple versions of the same component at the same time is cool, the concept of component versioning also plays a significant role in future capabilities, such as the flow registry and extension registry.

The Flow Registry refers to improving the software development life-cycle around building flows and deploying them across environments. In order to version control a flow, it is important to capture the versions of the components the flow was running. If a flow is deployed from a dev environment to a prod environment, and dev is running version 1.0 of a processor and prod is running version 2.0, the flow may not produce the same results in prod as it did in dev.

The Extension Registry refers to creating a place for publishing and discovering NARs, so that every NAR doesn’t need to be bundled with NiFi by default. Many different groups may want to publish their own variation of a processor such as PutHDFS, and the consumers must be able to understand which version they are pulling in. In addition, when deploying a versioned flow from the flow registry, the target environment may not have all of the components in the flow, and the extension registry provides a central place of these components to exist.

So while component versioning may not seem like a big deal right now, it will play a significant role in the future to come.