The 1.4.0 release of Apache NiFi contains a new Distributed Map Cache (DMC) Client that interacts with Redis as the back-end cache implementation.

This post will give an overview of the traditional DMC, show an example of how to use the Redis DMC Client with existing processors, and discuss how Redis can be configured for high-availability.

The Distributed Map Cache (DMC) Client is a controller service for interacting with a cache. NiFi has traditionally provided an implementation of the DMC Client that talks to a DMC Server.

There are a number of processor that make use of a cache through the DMC Client interface. Some of these processors interact with the cache directly, such as PutDistributedMapCache and FetchDistributedMapCache, and others leverage the cache behind the scenes, such as DetectDuplicate or Wait/Notify.

In a typical NiFi cluster, the DMC Server is started on all nodes, but the DMC Client points to only one of the servers, which would look like this:

A benefit of the DMC Server is that it can be fully managed by NiFi and doesn’t rely on any external processes or third-party libraries. However, a limitation is that it was not built for high-availability. All of the cache data is in the one DMC server being used by the clients, and if that node goes down, there is no fail-over to one of the other nodes.

The good news is that we can easily provide additional implementations of the DMC Client that leverage alternative key/value stores. Since other components only know about the DMC Client interface, the implementation can be swapped out without changing those components. This means processors such as PutDistributedMapCache and FetchDistributedMapCache will work exactly the same.

The 1.4.0 release of NiFi introduces the Redis DMC Client. In this case, there is no longer a DMC Server running in NiFi. The setup would look like the following:

If you completed the above example, you should have a working flow that is storing the current date in Redis under a key name “date”, and then retrieving that value into a flow file attribute name “date.retrieved”.

The above example used a standalone Redis which still leaves us with a single point of failure. We can improve upon this by using Redis Sentinel which provides high-availability for Redis.

I’ll assume you can follow the Quick Tutorial for setting up Redis Sentinel.

We can then re-configure the RedisConnectionPoolService… 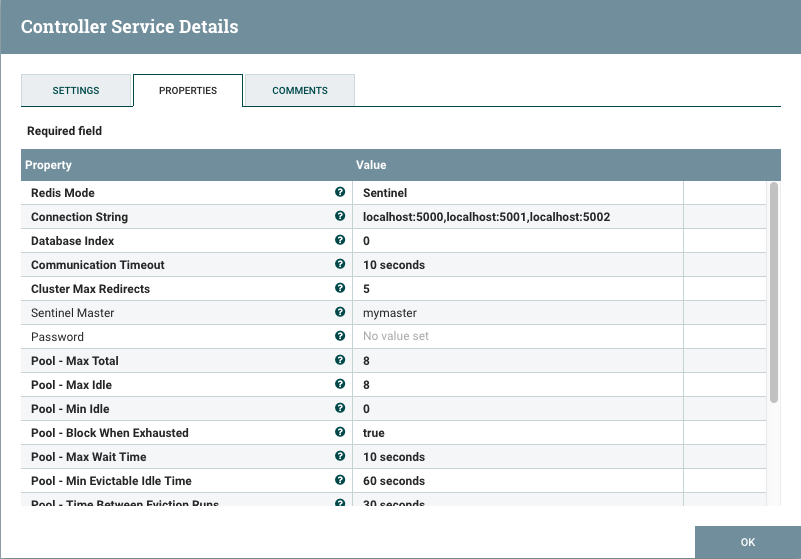 We change the “Redis Mode” to “Sentinel” and the “Connection String” becomes the comma-separated list of sentinels. We also specified the “Sentinel Master” name as the default name of “mymaster”.

At this point we can start our flow again and everything should be working as it was before.

If we then kill the Redis server running at 6379, we should see a fail-over take place in the sentinel logs:

At the same time, the PutDistributedMapCache processor would show an error about being unable to retrieve a connection from the connection pool. This happens while the sentinels are in process of performing the fail-over.

In Redis Sentinel, each Redis server has a copy of the entire data set. In some cases it may be desirable to shard the key space across several Redis servers, where each server only has a portion of the data set.

So for the Redis DMC Client Service we are limited to standalone Redis, or Redis Sentinel.